When Dil Se movie released I was a teenager. Kashmir was a boiling point of the country. Nationalistic sentiments reigned high. The pulse was Vande Mataram much like Bharat Mata Ki Jai we have today.

I was a teenager brimming with love for the nation. I wanted the government to kill any person deemed anti-national; not give them even a kangaroo court hearing.

For me country was above personal interests and there was nothing like human rights violation. During such times Dil Se was released calling out government brutality openly.

The excesses of military were highlighted and how an innocent citizen is pushed towards the wrong side of the law was shown deftly. I, however, outrightly rejected the movie and thought it was glorifying terrorism.

Much to my dismay, I grew out from my teenage. Life and its experiences humbled me. Travelling made me wiser. I can’t say I am calmer because a ride to hell and back can truly test your sanity limits but it does make you a little better than before as well as a little bitter than before.

I used to think that better and bitter are choices, but they are not. In fact, they add up to your life making you everything that you don’t desire.

You have to end up accepting yourself which is the toughest part of the journey that you embark on from the time you are born.

I can firmly say, today, that acceptance of what you’ve become is your way to say sorry to yourself. Only after acceptance starts reform. We all want to change ourselves but how can we change without accepting what we are already. 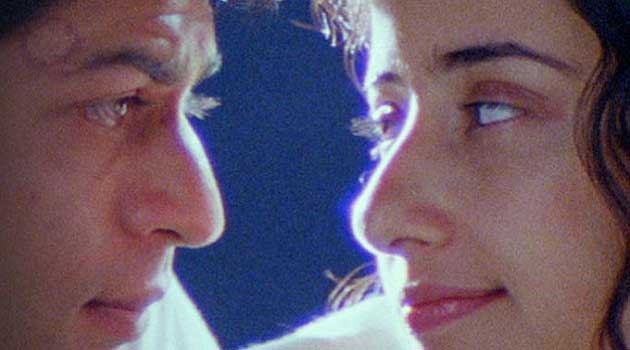 After 20 years of Dil Se, I chanced upon the title song of the movie on YouTube. I felt a jolt in my heart. I felt as if someone punched me in the stomach and sucked the air out of my body.

The soul of the song is not its lyrics or music but the way the Director envisioned it. Mani Ratnam’s vision was imprinted throughout the song and I couldn’t thank enough my wiser self for being able to see the song video.

The song Dil Se starts with a police siren and men in uniform guarding the city from unseen dangers. There are barbed wires and fire everywhere. The army is marching on the streets reiterating its iron clad presence in the area.

The picturisation is noteworthy of human tendency to zealously guard the past. The past which pricks us, wants to destroy us, keeps reminding us of our pathetic state and yet we keep protecting it with an iron will.

We not only want to protect the devil of our past but also dance with it. Our heart keeps wailing for freedom from the past and yet we ensure to curb its wail.

Manisha Koirala running in the lanes of the cursed city is every one of us. We keep running from the hauntings. We are the hunted and we are the hunters stuck in the midst of firing.

Just like Manisha running away from a deeply agonizing history, we also everyday run from ourselves. When we wake up in the morning we can feel the weight of the past on our bosom but we refuse to let go of it.

We fear the change; we fear the acceptance of what made us. We are not a consequence of a thunderstorm but a series of actions whether well intentioned or circumstantial.

We refuse to acknowledge this. All we do is get up in the morning and pretend to be happy and start running an endless chase much like Manisha in the song.

And then something beautiful happens. We refuse to acknowledge it, again. Like Manisha’s Shahrukh, we get someone who can show us the beauty even in the ruins. Someone who runs along with us, guards us, protects us, saves us from the chest thumping devil of the past, makes sure it grabs us when we fall.

When all the fingers point at us, it wraps us in the warmth of its arms. In a beautiful sequence, Manisha’s bangle is stuck in Shahrukh’s finger. She purposely breaks the bangle to free herself from him. It speaks so much about us.

We purposely move ourselves away from hope and faith to marinate in suffering. We think we don’t deserve love but in reality each one of us is born to love, to be loved. We, in our deepest moments of despair, push away the hope which crawls to us in the smoothest possible way. 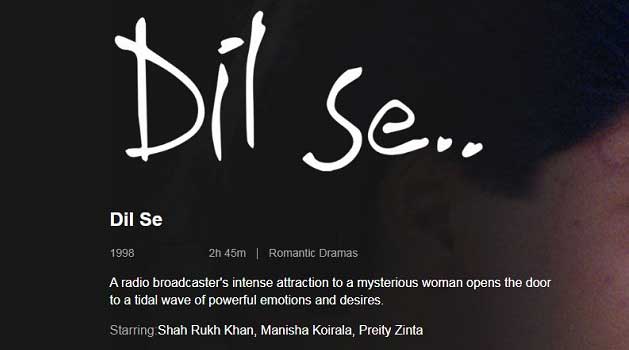 Shahrukh tries to convince Manisha that they are the leaves that departed in autumn and after so many seasons they have re-grown to reunite again. He explains to her how pain and love are interrelated eternally.

Love is the cause of pain and we have to believe in the power of love. Shahrukhs of our destroyed lives want to rescue us. They are watching every action of ours in a bid to save us from paying homage to our past every day.

Unbeknownst to us, they are our guarding angels who offer their helping hand to us whenever we are sad and lost. Yet, we chose to remain ungrateful to them because our sufferings have made us bitter and numb.

However, Manisha has tried to triumph her past in some measures, at least in the song, though not in the movie. We see children running on the streets, a symbol of excessive happiness and innocence, a symbol of goodwill and freedom.

Finally, in the song at least, she throws open the door of her stoned heart to Shahrukh who brings happiness back in some measure. There is cheerfulness, unabated glee, hugs and happiness written all over in this sequence.

Shahrukh acknowledges that relationship is a bondage where there are stone walls and barbed wires. Yet, the vines grow reminding us of the never ending tales of love which is enacted by different characters in the world.

These are symbolic of love. Unhappiness in the heart is vibrant but remember, it keeps coming and going. We are but victims of birth and death, the only certainties of this incertitude life.

This song teaches that one should break free from the shackles of past. Sometimes you may get your Shahrukh but if you don’t, then don’t lose hope. Just be your own Shahrukh and move past the past. It’s over. It’s done and dusted. Only you are rolling in the dust and getting dirtier every passing day.

My thoughts about this movie have changed too. Wise is just not a word but a way of life and thankfully I got in to one.