The media have been following every step of the COVID-19 journey – with multiple stories and round the clock updates, and yes with their own agenda.

Media never had a vaccine for the coronavirus disease yet they played all the roles that could be possible to limit the outbreak, but all these came for a price.

The constant barrage of new information, new cases and new advice had indeed been challenging to keep up with.

It is important that the media should have reported the stories behind the growing numbers of infections and deaths, and they should not have been dependent just on government briefings.

Media even worked on new narratives

Fair enough to understand that COVID-19 outbreak is not limited to reporting by health and science journalists, but was it prudent to set narratives while we fought a pandemic.

Building stigma was incredibly bad– and it drove people to hide illness in order to avoid discrimination and it prevented them from seeking healthcare, which aided viral spread.

Social Distancing was imposed as a temporary phenomenon to contain the spread of infection, but the media kept on orchestrating it to galvanize the faultline and social cleavages into permanent distancing.

Amidst this, theories also floated around that the virus was engineered in a lab as a bioterrorism agent, or that the symptoms are actually caused by the 5G mobile network.

Peeved at the proceedings, responsible organisations time and again stressed that this was the time for science and not rumours. “This is the time for solidarity, not stigma.”

Prime Minister Narendra Modi too publicly said that “COVID-19 does not see race, religion, colour, caste, creed, language or borders before striking. Our response and conduct thereafter should attach primacy to unity and brotherhood. We are in this together.”

Modi’s statement came after a Muslim congregation that sparked a wave of COVID-19 cases in India triggered outrage that later took an Islamophobic turn. 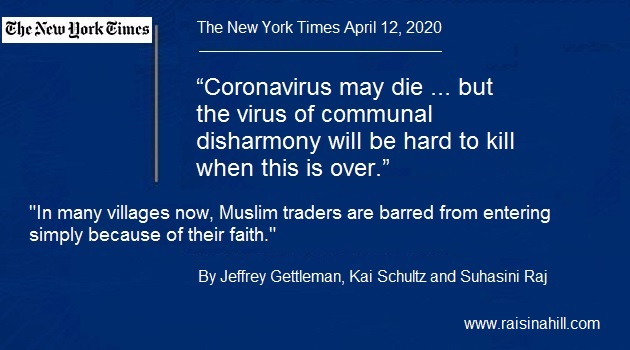 Just because the government belongs to right wing Hindu nationalist party does not mean that everything will be hunky dory for the Hindus and hurly burly for the Muslims.

Unperturbed, the media continued their blame-game, and even involved citizens into this.

Why would media houses follow an agenda rather than investigating the real state of affairs, unless they have associated business interests? Should media be given the right to play a divisive role in society?

When media is supposed to inform that congregations for any religious and social function are deadly dangerous; why should they try to pit one community against the other?

This was vivid in the reportage of markaj (meeting) of a community, wherein the media acted irresponsibly, and the government was put into the dock, as the so-called intellectuals used invectives without knowing their meaning.

News was presented on the markaz in such a manner that immediately found space in social media and public opinion was quickly constructed around the premise that Muslims were responsible for the pandemic. 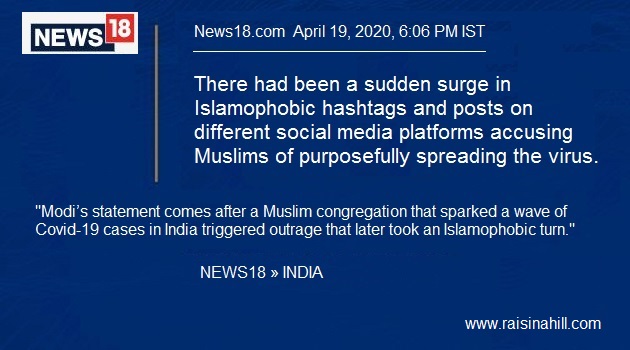 In these worst of times for the humankind, the media actually became a potent instrument of hate-mongering amidst global lockdown, and since the majority of people were hooked to their phones or television sets, COVID-crisis seems to have turned out to be a boon for the media.

Fourth Estate this time, again, ceased to be less in society, and more into market. Today, it is less unbiased, more biased. Most are pro-establishment, and few are anti. Some are sectarian, hardly anyone non-sectarian.

Crisis, be it of hatred, hunger and humanitarian, requires to be resolved through cooperation and solidarity. Media, rather than generating such cooperation, was found constructing and feeding such narratives that led to hatred and animosity.

People who anchor their own shows on televisions and newspapers and agencies which run news websites, are supposed to be donning the roles of intellectuals. But, they seem to be suffering from acute identity crisis.

As a result they are playing on the wrong foot, and their every wrong shot is inflicting irreparable damage, every day.

Then there are so-called spokesman of different organizations who are more of a Channels-Buff and who keep playing into the hands of the media, either for paltry sums or for cheap popularity.

They hardly understand the scale of long-term damage that they are causing to the society and the nation as a whole. COVID-Crisis is a global event. Playing a divisive role is endemic to the Indian media, amidst the pandemic.

Bhupen Singh, a freelance journalist based in New Delhi, says …in times of crisis, democratic governments may take a dangerous autocratic turn… (that is the time when) the health of journalism in a country can be examined.