One segment which is suffering due to COVID-19 is the investors, especially the ones who have invested their hard earned money in mutual funds.

Mutual Funds are generally considered to be reasonably safe and liquid investments for retail investors.

But, the sudden shocker by Franklin Templeton on April 22 to freeze six of its debt schemes have put investors in a panic mode, resulting in a sharp decline in the Assets Under Management (AUM) of credit risk funds. 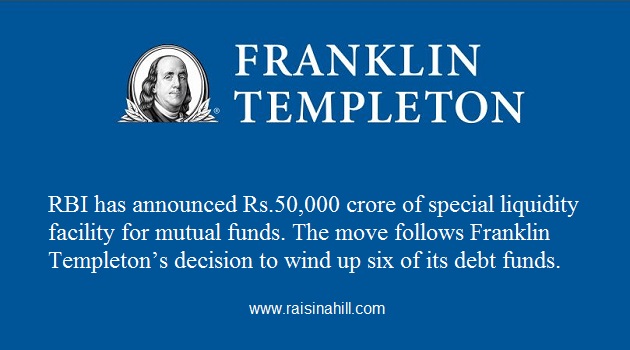 Another adverse development for the mutual fund segment is the downgrade by the rating agency CARE of the long-term debt facilities of Reliance Home Finance and Reliance Commercial Finance to default.

This was followed by Reliance Mutual Fund announcing a write down in the value of its holdings in the two entities owned by Anil Ambani.

The rating downgrade is likely to have a negative impact as many debt-oriented mutual fund schemes that have exposure to papers issued by the ADAG group of companies.

Franklin Templeton cited the liquidity challenges in the bond market for its decision to freeze six of its debt schemes.

What is alarming about this move is that investors have been left in a lurch with no redemption option available to them.

Investors will also not be able to transfer money from the six schemes or make lump sum investments.

Apart from these six funds, investors enrolled in the Systematic Transfer Plans offered by Franklin Templeton will also get affected as their money temporarily parked in the debt funds to be later transferred to equity funds is also stuck now.

Franklin Templeton, according to its own admission, is receiving a flood of queries seeking clarifications on what really happened at one of India’s top mutual funds houses.

What will the investors get?

Investors will get proceeds (in proportion to their individual holdings) which the fund house is able to recover by selling the underlying investments in these schemes.

When will they get their funds?

No clarity about this as this will depend on the ability of the fund house to sell off the assets and recover the money.

This will depend on the situation in the financial markets and the fund’s ability to sell the bonds in secondary markets.

However, if the situation remains bad, the investors may need to wait till the maturity of these schemes.

The culprit here again is COVID-19 and the ongoing lockdown which has brought businesses to a standstill and negatively impacted their ability to repay their debts.

This has triggered a panic wave among investors in debt funds who are looking to redeem their investments which in turn is making debt funds resort to borrowing especially because of the poor liquidity in the debt markets and increased redemption pressure.

SEBI, the regulatory authority for financial markets has allowed mutual funds to borrow up to 20 per cent of their assets to meet redemption pressure but reluctance by banks to lend has affected the ability of these funds to do so.

What to expect now?

While negatively impacting the investor faith in mutual funds as a whole, the move is likely to result in further demand for redemption and thus increased outflows from the mutual funds.

However, the Association of Mutual Funds of India (AMFI) does not expect this crisis to snowball into something bigger.

It believes that adequate banking liquidity, expectations of further rate cuts and actions by RBI will keep the bond market liquid and allow it to function normally.

Looking at the growing investor concerns, Reserve Bank of India has announced a Rs.50,000 crore of special liquidity facility for mutual funds (SLF-MF).

The RBI plans to conduct 90-day repo operations at a fixed rate of 4.4% and the banks will be required to deploy their funds for meeting the liquidity requirements of the mutual funds.

This could be either through loans or outright purchase of repos against the collateral of investment grade debt held by mutual funds. 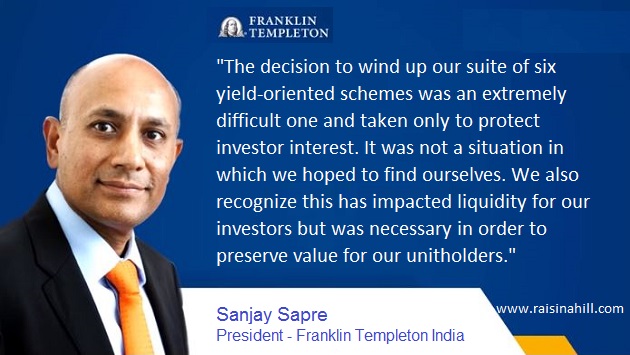 But this may not prove to be effective in case of the mutual funds having a higher exposure to low rated bonds especially in view of the bank’s aversion to exposure in risky segments.

So liquidity may remain a concern area for funds with high exposure to AA rated or below rated credit risk.

However, funds such as Kotak Mutual and ICICI Prudential with significant exposure to AAA-rated bonds or papers are still doing well.

While almost all funds have some exposure to low rated (AA or below) papers, the same should not be more than 15-20 per cent, experts advise reiterating that debt funds remain a good investment option despite the current woes.