Florence Nightingale was the right person at the right place in the right time, and she was willing to step forward to do the job. Bravo for her.

Nightingale first heard the ‘call’ that would eventually lead her to nursing at the age of 17 while walking in the garden of her family home.

After a brief visit to the Institute of Protestant Deaconesses at Kaiserswerth, Germany, during a European tour in 1850, she finally convinced her parents to allow her to return to Kaiserswerth the following year to attend a 4-month nurses’ training.

Thus, at the age of 31, she finally fulfilled her dream of becoming a nurse.

Florence Nightingale never married, but she was not without opportunities. Her reason for not marrying was her career: She knew she could not have both.

As an upper-class married woman, she would have to give up her vocation as a nurse, which had become more important to her than anything. She lived to the age of 90.

If Nightingale were alive today, she would probably say, “What have you done to my photograph?”

But after taking a look around at what’s happening in the world, her next words might very well be, “I told you so”.

In a move that foreshadowed social distancing, Florence Nightingale was first to recommend separating patients by at least 6 feet—a distance that prevented them from being able to touch each other.

And even before germ theory was widely accepted, Nightingale urged what is now our biggest weapon against viral transmission.

In 1859, she wrote in Notes on Nursing: “Every nurse ought to wash her hands very frequently throughout the day.”

In an era when few effective drugs or other treatments were available, cleanliness and hygiene were, in her view, fundamental to the care of the sick. 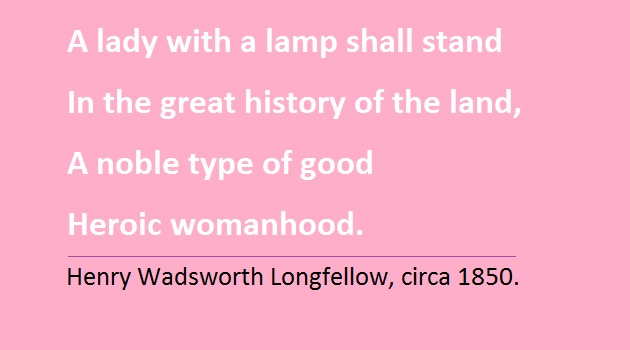 Writing for Medscape, editor Laura A. Stokowski, points out that Florence Nightingale understood the risk to nurses’ health posed by the care of infected patients.

Observing that the mortality rate of hospital nurses was higher than that of the general population, Nightingale advocated strongly for protecting these nurses from fever and contagion.

In the pandemic times of COIV-19, a large temporary hospital erected for the care of overflow patients in London has been named Nightingale, a move seen as fitting tribute to her legacy as a data science pioneer.

According to Laura, her use of statistics and data to track outbreaks of disease and help hospitals manage their resources was prescient in light of the work being done by hospital epidemiologists to tackle the public health challenge that we face today.